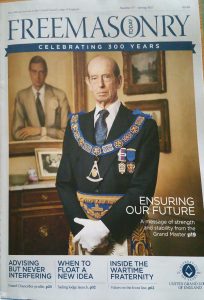 Inside the shadowy world of the Masons: Rolled-up trouser legs, funny handshakes and a big royal following – a new show delves into the Freemasons' secrets
New series delves in the shadowy world of the Freemasons organisation
Reveals some of its more high profile members including the Queen's cousin
The Grand Lodge celebrates its 300th anniversary this year so the five-part Sky 1 series comes at an opportune time

They don’t ride goats but they do have to bare one breast and roll a trouser leg up.
They’re not meant to use their friendships for career gain, but they do have a strange handshake. And they don’t appear to be striving for world domination – they’re far too busy learning lines for their countless ceremonies. 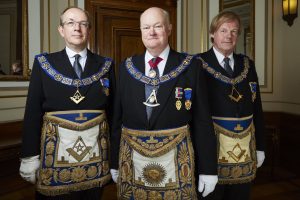 The Freemasons have long been seen as a shadowy organisation, accused of plotting to take over the world.
A new series delves inside the shadowy world of the Freemasons. Pictured:The ‘first degree salute’, as recreated in 1989 documentary Inside The Brotherhood
The pedigree of some past Masons – including Winston Churchill, the Duke of Wellington, Lord Kitchener, Kings Edward VII, Edward VIII and George VI, and Prince Philip, a Navy Lodge Mason for more than 60 years – has even led to accusations that they have a stranglehold on the Establishment.
So a new documentary about this enigmatic fraternity is fascinating, even if the truth about the Masons is rather prosaic. It turns out it’s a bit of a glorified dinner club.
‘The public’s perception of us isn’t realistic at all,’ says Jonathan Spence. The former banker is one of three deputies to the Grand Master of the United Grand Lodge of England, who happens to be the Queen’s cousin, the Duke of Kent, a Freemason for 50 years.
‘We’ve thought about confronting the myths for a long time. If we show how it really is – for example we have a masonic handshake but it’s only for ceremonial use – then people might understand us more.’

The Grand Lodge celebrates its 300th anniversary this year so the five-part Sky 1 series comes at an opportune time.

The Duke of Kent who is the Grand Master of the United Grand Lodge of England
‘Freemasonry has had a policy of more openness over the past 30 years to try to show people what we’re really about,’ says Jonathan. ‘And as this is our tricentenary it seemed like a good time to let the cameras in.’
Freemasonry was originally based on guilds created by stonemasons in the 14th century.
Many of the traditions go back to those days; the baring of the breast and rolled-up trouser leg, both part of the initiation ceremony, are meant to prove the newcomer is a healthy man.
As ancient stonemasons travelled from job to job, the handshakes were created to recognise a man’s experience, with each level of mason using a different handshake.
Gloves and aprons, which were worn by the stonemasons for protection, are still worn today and become more decorated as a Mason climbs the ladder within the organisation.
The square and compasses, trowel and plumb level, tools that every stonemason needed, are now internationally recognised insignia of the Masons.
The basic tenets of the Masons are that they’re all equal (which is why they call each other brother) and that today, instead of working with stone, they’re working on themselves to make ‘good men better’. As they work harder on themselves, through charitable work for example, they climb up the hierarchy.

Each man goes through three separate ‘degrees’ during his time with the Masons – Apprentice, Journeyman and Master – and for the first time some of the rituals, which take place at Masonic Lodge meetings around the country, have been filmed.
‘The ceremonies mirror the principles of Freemasonry which are brotherly love, relief and truth,’ says Garry Hacking, a nurse who works with 50 women and finds the Masons have given him some much-needed male company.
‘The friendship is a big part of it for me but the ceremonies are important too. They’re profound.’
To become a Mason, you can either apply online or another Mason can recommend you. There are six million members worldwide, with 200,000 in England and Wales, meetings range from twice a week to four times a year and Masons can be members of several lodges, or visit new ones while travelling.
Membership here peaked at 300,000 after the First World War as men joined to recreate the brotherhood they’d found in the trenches. The group went underground in the 30s when it was targeted by fascists and Nazis; up to 200,000 European Freemasons died in concentration camps.
‘When we first started making this series I didn’t understand why, in the 21st century, people would want to join something that was about handshakes and aprons and that was men-only,’ says Emma Read, the show’s executive producer.

‘It felt really anachronistic, so we’re looking at what its relevance is in the 21st century. But it’s been a real eye-opener. Some are there for the tradition but for many it’s about making new friends. It’s the oldest social network in the world.’
We meet various Masons in the show who reveal how the organisation has helped them through tough times such as the death of a partner or serious illness.
‘The Freemasons may be a traditional institution but it’s also a major support network for men and I was taken aback by that,’ says Emma, who spent a year shadowing them.
‘When you’ve fallen on hard times – emotionally or physically – you have a real group of friends you can turn to. Coming out of the show I thought it was a force for good.’
Inside The Freemasons starts on 17 April on Sky 1. For more information on the Masons visit ugle.org.uk.