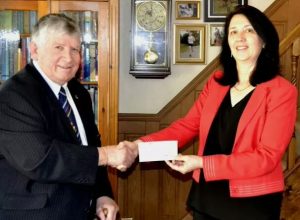 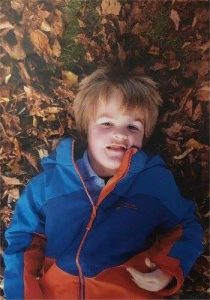 When W.Bro Colin Manning, Charity Steward of 'Breaksea Lodge', had to upgrade his mobility scooter provided by the Grand Charity to a larger model, he was asked if he knew of any Brother who could use the one being replaced.

He passed it to W Bro Chris Peters' wife Sheila whose existing scooter was 15 years old and fading fast. Chris decided he couldn't accept it for nothing and donated a cheque to Breaksea's charity account.

The Lodge then asked Chris if there was a charity he would like this money to go to and they would match it.

Chris's Grandson Ellis is supported by a Charity called 'UNIQUE' as he has part of his No 7 brain chromosome improperly connected. The charity is called 'UNIQUE' because no child in the world who suffers from this problem (and there are many) has the same part of the brain disconnected. Thus they are all 'unique'.

Ellis couldn't walk until he was 3 1/2 years old and only just started talking at around the same time. He is six now, and still has to wear ankle supports. He can read and spell but has severe difficulty in writing and maths. Ellis is one of the lucky ones there are other children much much worse.

Pictured is W Bro Colin Manning passing a cheque for £200 to Mrs Anita Knill local representative for Unique and a photo of Ellis on whose behalf the money was donated.