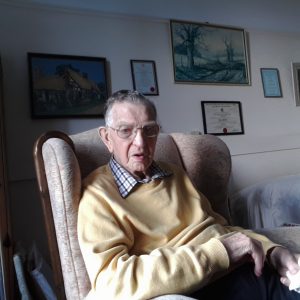 The Legend that was VERNON HOLTAM

The Master of Masters

I am proud and honoured to have been invited and trusted by Vernon himself to stand here today. I was not quite sure quite where to start in delivering for your acceptance a fitting and full eulogy to the LEGEND that was Vernon Holtam

Our own memories and individual experiences of Vernon will quite naturally be different and remain with us for evermore, warm and bright

He was a Dad, Grandad, Great Grandad, Friend, Neighbour and for so many of us he was the very best Masonic Brother

His past behaviour and natural deportment stood him apart from the norm and have clearly merited the very high regard and respect in which we all held him – the evidence is here in spades today, just look at the faces around about you

His character and robust beliefs demonstrated he steadily persevered in every virtue, stood firm on principle and led by example

In everything we witnessed him do there can be no doubt he judged with candour, admonished with friendship and reprehended when and if necessary with mercy, understanding and his very own brand of humour

It was not a challenge to think of words that demonstrated the affection we all had for him – in Masonic terms he became not W Bro Vernon but for most quite simply “W Bro Dad” – our brotherly love for him knew no boundaries.
He was also known as to many as “The Worshipful Keeper of the Pickles” – from a passion for those pungent vegetables that knew no equal

Vernon Holtam was born on the 22nd July 1920 in St Oswald’s Rd, Cadoxton. He was the 7th of eight children – with three brothers and four sisters.

He attended primary and senior school in Cadoxton and left school at 14 in 1934. He went to work in a butchers shop in Albany Rd, Roath, Cardiff, working six days a week from 8am to 8pm. He cycled from Cadoxton to Cardiff every day. If he had enough money he could go by train but that did not happen often.

In 1939, on the outbreak of the Second World War he was called up to do his Military Service. He was just 19 years old when he joined the RAF.

Originally stationed at Cardington and then sent to Driffield in Yorkshire for training in 1940. Then onto Sutton Bridge in Lincolnshire for about a year where danger lurked from day and night bombing.

Then was deployed to Aden where he spent about five years. It took several weeks to get to Aden as the Suez Canal had not been built and it was necessary to go via South Africa. How times have changed

In 1945 at the war end he was de-mobbed, came home and began working in N.W. Cramps the butchers in Barry Rd, Cadoxton. He worked in this shop for nearly 40 years and ran the shop as his own business for some 30 years before retiring in 1983

Also in 1945 he married Maisie and they had three children Rosemary, Brian and Helen. Vernon and Maisie were married for 57 years until Maisie passed away in 2002.

While he was married to Maisie he was quite a quiet person …. Hard to believe I know … but after her passing he took over as the ‘chief chatterbox’ of the family…….he was never again to be lost for words!
Evidently he had never managed to get a word in before as she was the greatest ’chatterbox ever!

After he lost Maisie he immersed himself in all aspects of Freemasonry and it was this interest that kept his mind and spirit active. It was a lifeline for him which he grasped with both hands. It gave life a new purpose enabling him to enjoy his later years.

Vernon was 96 years old when he left us and is survived by his younger sister Rita who is 94 and lives in the IOW. She remembers him as a very protective big brother who always stayed up to make sure that she was safely home after a late night even though he had to be up very early the next day to cycle to work in Cardiff.

The family wish to extend their thanks to the staff of West 1 of Llandough Hospital for the kindness and care that they gave Vernon and we thank God that his departure was dignified and peaceful.

They would also like to express our gratitude to the carer’s at Baltimore House where Vernon spent the last 7 years. He went to live there in 2010 when he felt that his health would no longer allow him to live alone. He was treated with care, kindness and respect.

As the ladies there will know -only too well - he liked everything done properly and if it wasn’t he was not averse to strongly voicing his opinions.

He also had his favourite carers - but we extend our thanks to all of you for the kindness and respect that you gave him.

Vernon was very lucky to have another family - ‘his brothers in the Freemasons’ who are too numerous to mention. The family thank you for being such a caring family and for keeping him going in later life.

He often had a better social life than most youngsters, out gallivanting most nights and being chastised by his carers in Baltimore for getting in after 11.00pm.

The family would also like to thank a special group of fellow masons who were very loyal friends and who were always willing to provide transport for him whenever he needed it. They never failed to ensure that he was kept well informed regarding all Masonic business and often he knew more about what was going on in the Lodges than those who were there.

To all those special friends they extend their sincere thanks for always including him. He was so appreciative of all you did and for the time that you spent with him.

His commitment was and always will be unmatched

A MASSIVE total of 264 years devotion and dedication

As an indication of the esteem we all held Vernon in, our PGM R W Bro Gareth Jones was mortified to realise he could not be here today to be with us all in saying his own farewells. He did though ask me to repeat his own immortal words when describing Vernon as “The very best Grand Lodge Officer Barry never had – he was a friend to us all”

There are good ships and wood ships
Ships that sail the sea
But the best ships are …..
Friendships
And may they always be

I have been reminded several times recently that one of Vernon’s well used phrases was ……. “You will get your reward in Heaven”

Time to reflect on what he meant to all of us … it goes something like this
And now, the end is near
And so he faces the final curtain
My friends, I'll say it clear
I'll state Vernon’s case, of which I'm certain
He lived a life that's full
He travelled each and every highway
But more, much more than this
He did it Vernon’s way
Regrets, he had a few
But then again, too few to mention
He did what he had to do
And saw it through without exemption
He planned each charted course
Each careful step along the byway
And more, much more than this
He did it Vernon’s way
Yes, there were times, I'm sure he knew
When he bit off more than he could chew
But through it all, when there was doubt
He ate it up and spat it out
he faced it all and he stood tall
And did it Vernon’s way
He loved, He laughed and cried
He had his fill his share of losing
And now, as tears subside
He find it all so amusing
To think he did all that
And may I say - not in a shy way
Oh no, oh no, not me
He did it Vernon’s way
For what is a man, what has he got
If not himself, then he has naught
To say the things he truly feels
And not the words of one who kneels
The record shows He took the blows
And did it Vernon’s way
Yes, it was always seemed that it was ………. Vernon’s way
And so back – briefly - to those dark days of the war where he served so gallantly, battling for the freedom we enjoy today - for a fitting way to conclude

Given at Vernon’s funeral on March 10th 2017 at All Saints Church, Park Road Barry, by W Bro Kevin Hearne, Worshipful Master, Breaksea lodge No 8358 in the Province of South Wales