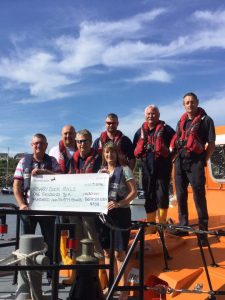 Breaksea Lodge of Barry presented a donation of £1,630 to the Barry Dock RNLI in memory of their members Dai Sam Davies, Doc Stephens and EGW Powell (Ted) who sadly passed away in May of this year. Ted had received the MBE for his services to the RNLI.

The donation was raised at a Summer Social event at The Seashore Bar and Grill, Sully, which was attended by many friends & freemasons, and also Beryl Davies, wife of Dai Sam, and their family

The lodge has historic connections with maritime after being named after the Breaksea Light Ship. So it was very appropriate for Patrick & Nicola Jones to present the cheque on the Barry Dock Lifeboat, after a trip around Whitmore Bay, Barry Island.

Patrick said, “We would love to thank the crew for taking us out on the lifeboat and letting us take the helm, which was very special & memorable day indeed.”

In their 2 year term with Patrick as Worshipful Master of Breaksea Lodge, Patrick & Nicola Jones have donated £1,000 to the George Thomas Hospice in memory of Wayne Lewis from the previous Summer Social event, raised £1,600 for Noah’s Ark Children’s Hospital at a Ladies Night in November, and also taken part in the Walk Around Wales.

“We thank SA Brain & Co, KCS Transport and Lee & Andrew Selby for their kind donations for the auction prizes and all those who generously donated raffle prizes, and last but not least all those who came and supported us and the RNLI.”

We spoke in more detail to Patrick about how and why he became a Freemason, and what aspects he enjoyed..

“I was initiated into Breaksea Lodge in March 2008, and have loved every minute of it. On a personal note I have made plenty of new friends and have been supported all the way through the various offices to the chair to become the Worshipful Master and I am currently in my second year as Master. I didn't know anything about masonry before I was asked to become a member, although Nicola and myself attended charity functions, and Ladies evenings which we thoroughly enjoyed.”

“We have also got more involved with charity fundraising, The Walk Around Wales in aid of The Noah's Ark Appeal was a particular favourite having walked with Nicola and brethren from other lodges and their wives between Southerndown and The Blue Anchor a mere 16 miles in blistering heat !!! But it was worth it.”

“We held our first charity event, The Breaksea Summer Social in June 2015, again at The Seashore Grill and Nicola suggested that the evening should be dedicated to the memory of W.Bro. Wayne Grant Lewis who was a massive loss to the lodge and we raised £1000 for George Thomas Hospice a charity Wayne and his wife Elaine supported.”

“In November 2015, Nicola and I held our Ladies Evening, she chose the colour scheme, ladies gifts, table decorations etc. We both worked hard to make the night a success and raised £1600 for The Noahs Ark Children's Appeal. Nicola has been a great support to me and I cannot thank her enough. We have two children, Andrew and Liam and in June 2015 we became Grandparents to a beautiful granddaughter Isabella, so it has been a rather eventful couple of years !!!”

If this story has inspired you to want to know more about Freemasonry, please ask or look at our website www.southwalesmason.com We would love to hear from you.